I’m back, and I have another cookbook review for you! If you haven’t read my last cookbook review and didn’t already know, I really enjoy getting cookbooks from the library and try to make a few things from each. Since I already do that, I decided I’d review the cookbooks on my blog–no big deal, I just have to remember to get a picture of my food before I dig in.

This cookbook is  one I’ve been interested in since before last Christmas, which you might think is kind of ironic, because it’s called Modern Jewish Cooking by Leah Koenig. Yes, I requested a Jewish cookbook for a Christian holiday. I’ve encountered Koenig’s recipes before on Tablet, which is a Jewish online magazine (here’s a recent piece she’s written there), but I’m not 100% sure how I first heard about this cookbook. But I know I love Jewish food, and I know I love cooking, and the reviews for this one are pretty good on Amazon, so. 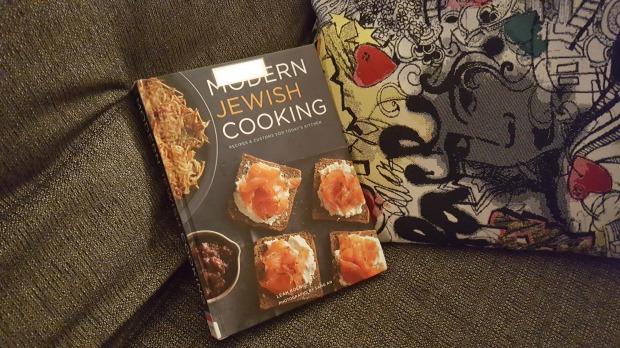 Before getting this cookbook and trying some recipes, my experience of Jewish cooking was generally limited to the Ashkenazi tradition–or Eastern European Jewish cooking. This is not a bad thing; I love matzo balls in my chicken soup, latkes are a winter staple for me, and knishes–well–those are just the ultimate comfort food. But as Koenig points out, Jews are a wandering tribe and have found themselves in just about every corner of the globe (except Antarctica). I’ve never had any Sephardi or Mizrahi cuisine, and this book has it all.

Some of the ingredients in this cookbook were harder to find; rosewater just isn’t something I see at Kroger, nor have I ever seen labneh there, nor za’atar. An Amazon search and reviews told me that Amazon’s prices on these items were “ridiculous” (not to mention, I’d have to pay for shipping!–no, thank you!). Luckily, Metro Detroit is a very diverse area with a large Middle Eastern population, and my best friend Toni lives less than a mile from a Middle Eastern supermarket and all of these items were much cheaper there than on Amazon. 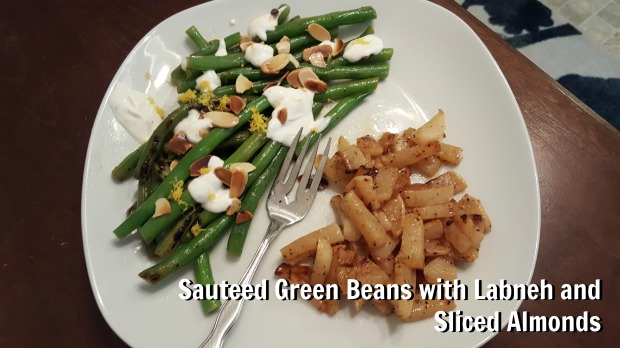 Speaking of Toni, the first recipe was one I made with her, which was the Sauteed Green Beans with Labneh and Sliced Almonds. The tangy labneh and the crunchy almonds really complemented the green beans. I also took an opportunity to try a new vegetable with the recipe for Pan-Roasted Turnips; it wasn’t bad–is anything ever bad if you cook it with a chunk of butter?–but turnips are not my new favorite vegetable. 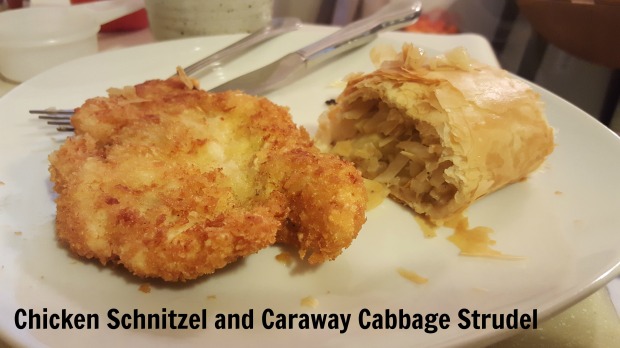 The following week, Toni and I made Chicken Schnitzel and Caraway Cabbage Strudel. I was at once wary and curious about both of these recipes, since I generally hate the result when I cook chicken in a pan on the stove–it’s always so dry and no marinade changes that. Second, my experience of strudel is that it’s a sweet  food, so the thought of savory cabbage and caraway seeds (which I’ve only ever seen in rye bread) in phyllo was either going to be amazing or terrible. Luckily, it was amazing, and the schnitzel was good too. I had to dredge the chicken in flour and eggs and panko, then fried it in oil on the stove. It wasn’t dry at all! I also took the chance to make Koenig’s Classic Challah recipe. My last attempt to make challah didn’t end perfectly–the loaves were too dense due to too much flour in the recipe. This time, I think the loaves turned out much better; definitely not dense! Since two loaves came out of it, and there’s no way I’d be able to eat that much bread (although I’ve tried), I gave the second loaf to Toni for her and her husband to enjoy. They said it went great with soup. 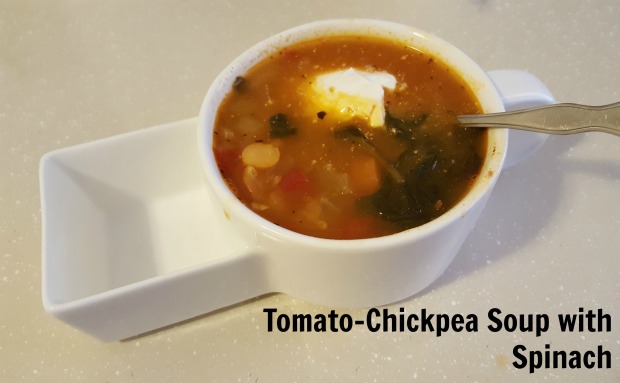 And since I just mentioned soup, Toni and I also took the opportunity to make a soup recipe in the cookbook as well. I’ve never used the word “aromatic” to describe food before, but that’s just what Koenig’s Tomato-Chickpea Soup with Spinach was. We garnished the soup with a scoop of labneh. And it was delicious. The leftovers were even better than the original result, too. I was so happy the three days I had leftover soup in my lunch box.

I made Sweet Hamantaschen, the triangle-shaped cookies eaten at Purim (yes, Passover has ended and Purim is not here yet). They were okay; I think I did something wrong. The dough was wayyy too sticky and kneading was a nightmare. Then I think I added too much flour. They weren’t awful, but I didn’t do it right, I think. The chocolate-peanut butter ganache I made for the filling was tasty!

Since the recipes in this cookbook are kosher, I would have liked to see more discussion of the principles of “kosher” means, and what is considered pareve (neutral, and therefore can be served with dairy or meat). But overall, it was a great cookbook to have for a few weeks, and I was very sad to return it to the library. In the end, I might end up buying this cookbook!

Ever since I was a teenager, I have loved getting cookbooks from the library. I used to check out one specific one all the time; I don’t recall the title but it was basically all about bread. At seventeen, I was fascinated by yeast and how a ball of dough could double in size with a damp towel and some warmth.

I finally got a library card for my local library a few weeks back, and after I’d taken care of that, I set out in search of the cookbook section. It took some looking, but I found them, and then I found Thug Kitchen: Eat Like You Give a Fuck. 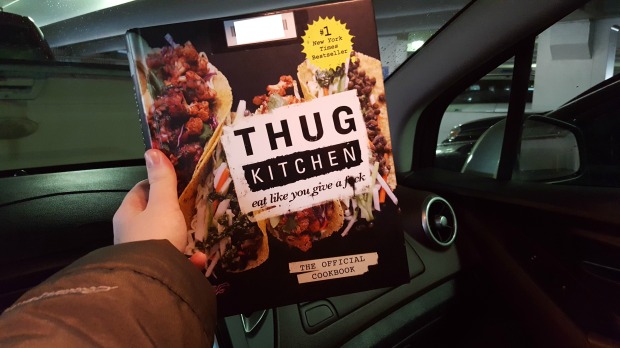 Thug Kitchen is a blog, if you are unfamiliar (I was, but I remember people talking about the cookbook a while back). They’re “the only site dedicated to verbally abusing you into a healthier diet.”

So, the cookbook. The recipes are all plant-based, which is nice, because I’m making a conscious effort to eat more fruits and vegetables. I’m not going exclusively plant-based; I like venison and hamburgers and chicken too much. Also, I hate most fruits. I was interested in the concept though, because if I can creatively incorporate more plants into my diet, that’s awesome.

The first thing I made were the Whole Wheat Banana Pancakes. I hate bananas, but I did, in fact, add the mashed banana the recipe called for. I think you should follow a recipe exactly the first time you make something (not that I’m the best example of this… ever). I followed the recipe exactly, but there was something that didn’t work. It was too thick when I made it, so when I made the first pancake, it didn’t form bubbles to show the pancake was cooked through. I had to add water to thin it out and get those air bubbles. Then I had about 25 pancakes instead of the 12 the recipe said I’d have. I had the leftovers every morning for breakfast for a week. Good with butter and fake grocery-store-brand syrup, good with almond butter and real maple syrup. 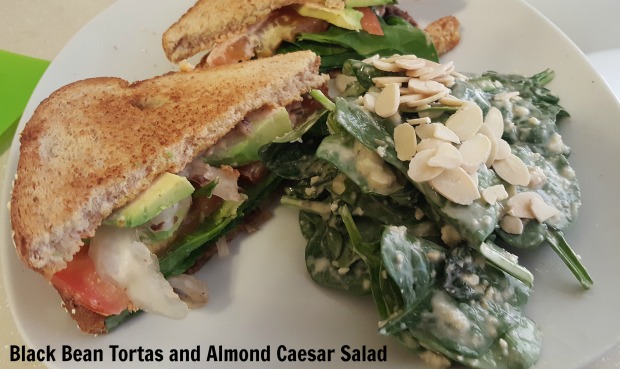 My friend Toni came over for dinner one night and we didn’t just have the Almond Caesar Salad; we also had the Black Bean Tortas. Both turned out quite good, although we agreed the sandwich was better than the salad (because on principle the sandwich is always better than the salad). I’d make both again. It’s funny that Toni and I are both sensitive to specific tastes, so on the dressing for the salad, she really tasted the lemon juice whereas I really tasted the raw garlic.

I also made the Spiced Chickpea Wraps with Tahini Dressing. Very tasty, and I’d never toasted chickpeas before, let alone seasoned them. The chickpeas tasted almost like peanut butter, and the tahini dressing was a nice balance. I might think about adding garlic to the chickpeas next time, though.

Since I had the book for three weeks, and we have a standing engagement every Monday, Toni and I also made the Roasted Carrot and Cumin Dressing (as well as this dressing from the Thug Kitchen blog… we laughed over “Eat a goddamn salad. Your asshole will thank you”) for salads. The carrot dressing was okay, but nothing to write home about. I think an addition of ginger would have benefited it greatly. 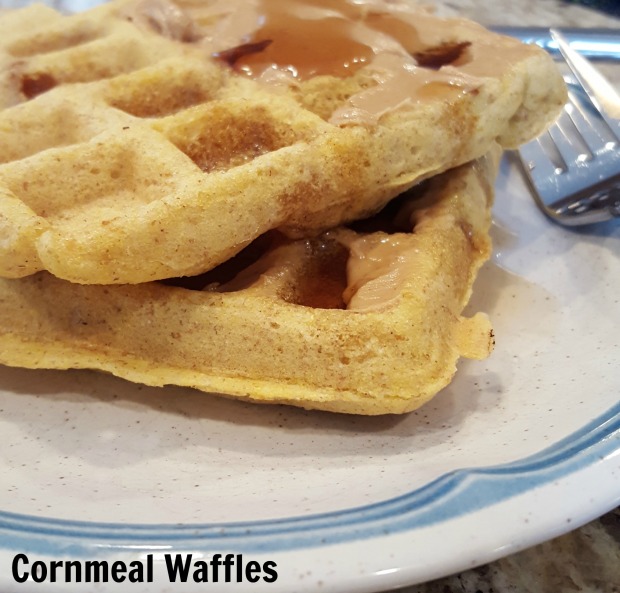 I experimented with savory breakfasts (which I prefer over sweet) by making Quinoa Oatmeal. It turned out well, and my oatmeal toppings of nutritional yeast and sauteed mushrooms was not as bad as it probably sounds–I promise. Not as savory, but I hijacked my parents’ waffle iron to make Cornmeal Waffles, which turned out absolutely beautiful and quite dense, too. They were very filling.

In addition, the book has a lot of good information, especially for those who are new to cooking or to plant-based recipes. They outline what their perfect pantry looks like, explain what some of their more “WTF?” ingredients are (like nooch or liquid aminos), and share just how to perfectly cook all sorts of grains and a pot of beans. Their guide to making green smoothies was helpful to me because I was finally making smoothies that didn’t taste… well, horrible.

To sum up my feelings for this cookbook, if you’re vegan or–like me–just trying to incorporate more plant-based foods into your diet, I would recommend it. I’m not sure I would buy it, but believe me, I transcribed some of the recipes that really worked and some I haven’t tried yet but want to. Get this book from the library and try some of the recipes before you commit to buying it. With the exception of the pancakes, I really enjoyed it.