I don’t know why, but not for the first time in a college-level class have I had to take a personality test. I mean, it’s had its purpose in either situation, I guess. It’s always been in writing and communications classes, so yeah–I guess there is a purpose for it.

I don’t like personality tests. I find that while they’re a valuable tool for self-awareness, a lot of people instead use them to justify their actions or why they “can’t deal” with certain people or situations. Kind of like with astrology–which I don’t believe in, either (partly because people take forever trying to guess my sign–swear to God, they guess Sagittarius twice and work through all the other signs at least once before they get to Gemini; partly because they treat me different when they find out I’m a crazy, two-faced Gemini; and I’ll tell you the last reason later on.)

I won’t start on why I hate the Myers-Briggs Type Indicator. This post is going to be wayyy too long if I do that.

Anyway, I don’t like personality tests, and I rolled my eyes a bit when it came up in class that we were going to take one. However, this one has a more professional slant with a focus on how you work and how to work with people who are different from you in the workplace (am I the only person on the planet who thinks you just have to learn how to adapt to other people’s personalities and you don’t need a test to figure it out?).

The DiSC model has been around for a few decades now. D is for Dominant, i is Influence, S is for Steadiness, and C is for Conscientiousness. Some people are a solid D, or i, or S, or C, and other people can be a blend of these. The DiSC model also emphasizes that all styles and priorities are equally valuable in the workplace and no one style is better than any other. It also emphasizes building more effective working relationships through self-awareness and awareness of others.

Anyway, it took me about 20 minutes and after that, my results were spat out into a nice little report, which I had to print out and bring to class.

I was not particularly surprised by my results–but I never really am. For the DiSC profile, I came up as an SC type–so I’m in the Steadiness group, but with a bent towards Conscientiousness. In summary, I like consistency and I aspire to be someone people can count on. Communication-wise, I am soft-spoken and seem approachable–although to people who are more outgoing, I am sometimes hard to read. The Conscientiousness part comes into play with my attention to detail and my desire to do things right the first time.

I marked up the report after printing it, not knowing that we would be marking them up in class (the black pen is before class, the green writing is from class). 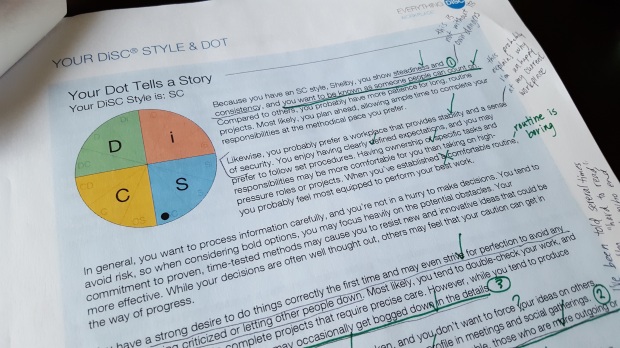 However, like some people who take the DiSC profile, I had more than three priorities (everybody who takes it has at least three priorities). I had four. Being an SC type, my first three priorities were Maintaining Stability, Giving Support, and Ensuring Accuracy. The fourth one, which my report says “is somewhat unusual for someone with the SC style,” is Offering Challenge.

Basically, I like to point out the flaws in other people’s ideas. I sometimes describe myself as a “no” person–I like to say “no” to other people, especially when I feel like they haven’t weighed the pros or cons or thought hard enough about something. I also am critical of things that lack common sense or logic. Yes, this might be explained simply by saying “I’m an asshole,” but I also think it ties into my desire for accuracy.

Back to the last thing I don’t like about other personality tests or astrology–they often don’t allow room for or acknowledge the role that life experiences play in shaping one’s personality. The DiSC actually does acknowledge life experience on the first page of the report. For example, Collaboration is not listed as one of my priorities. And I don’t hate working with others, but I’m generally quite skeptical of it–the result of being “the smart girl” and having to do most of the work on group projects in school (…and now I’m having flashbacks to biology during junior year).

Finally, to wrap this post up, the back of my report has a summary of how I can adapt to interacting with and communicate more effectively with people across all types. The advice I saw across all of them could easily be paraphrased as “don’t be passive; speak up more!!!”

All in all, I am glad I got to take this test for free; I wouldn’t have taken it otherwise. I also think it’s not as bad as other personality tests out there.

On Superbowl Sunday I schlepped back to my hometown for a Relay for Life fundraiser at Steiny’s Restaurant. If you watch my videos on YouTube, you’ll know my friend Toni. Toni’s awesome. Her mother-in-law founded the Shelby Township chapter of Relay for Life and organized the event.

If you’re not familiar with the name, Relay for Life is a fundraiser for the American Cancer Society (I say “a fundraiser” but it’s basically THE fundraiser because it’s what they’re known for). It’s staffed and coordinated by volunteers all over the country. It’s a 24-hour (or close to that) cancer walk where team members take turn walking around a track or on a designated path. People come to the event to make a stand against cancer, to remember lost loved ones, honor cancer survivors, and to raise money for ACS, which helps people who have cancer.

Both Toni’s mother- and father-in-law are cancer survivors. This was the first year they’ve had this event at Steiny’s, but it’s the eleventh year overall of having this fundraiser (the last two were at a bar called Muldoon’s in downtown Utica). It gets better and better every year, and they raise more and more money every year.

Toni and her husband were kind enough to pay for my ticket in advance–it cost $35 to buy a ticket before the end of January, and it cost more to buy your ticket at the door (I paid them back at the event). They also had raffle items that you could buy tickets for. There is also a 50/50 raffle, in which you pay for tickets, and half of the proceeds go to ACS, and then you have the chance to win the other half.

The event had a very good turnout, if I do say so myself.

I had a great time at the event. I got to catch up with Toni’s dad and her in-laws (I get a lot of validation knowing my friends’ parents like me–because I am a crazy person). I think Toni had a good time too!